I played around this morning with Meerkat, a new live streaming app that’s built to integrate with Twitter. I thought I’d share a few quick observations about how it worked for me in my newsroom.

I have suggestions below. My main takeaway, though, is that the simple Twitter integration makes me likely to use Meerkat (over Ustream, for example) for times when I prioritize interaction with followers.

(I won’t spend time on step by step instructions. Here are useful posts from TechCrunch and Mashable.)

I signed in first this morning with my personal Twitter credentials. I was walking into a large lecture hall to teach a colleague’s class, and I started a stream while they were getting settled.

|LIVE NOW| About to talk to a couple hundred freshmen – #meerkat http://t.co/4IEIMmnBmD

I invited the class to click the link on my Twitter feed, and several of them did. (Fuzzy screen grab is on the right. I didn’t think to take one once folks joined.) It became clear quickly, though, that while the users could watch from a browser or from within their Twitter app, and I could see how many were watching, they needed to be in the Meerkat app to comment or interact.

I played around with my colleagues in the Columbia Missourian newsroom after class. We learned some things quickly and decided to live stream our morning news meeting a few minutes later.

Lesson: Browser not the same as in-app

If we want people to interact with us in the app, we need to give them a chance to download it before the stream starts. So before we went live with our branded stream, we did just that.

We’ll plan to go live from the newsroom at about 11 this morning. Check back for a link if you want to follow along. — Columbia Missourian (@CoMissourian) March 4, 2015

Once there’s conversation within the app, each comment prompts an automatic tweet. And those tweets don’t include a link to the stream or a hashtag, so when seen on their own, they won’t make sense to followers. In the screen grab below, you can see that when a user asked within the app what the meeting was about, his comment showed up on my screen and also as a tweet to @CoMissourian from his Twitter account. 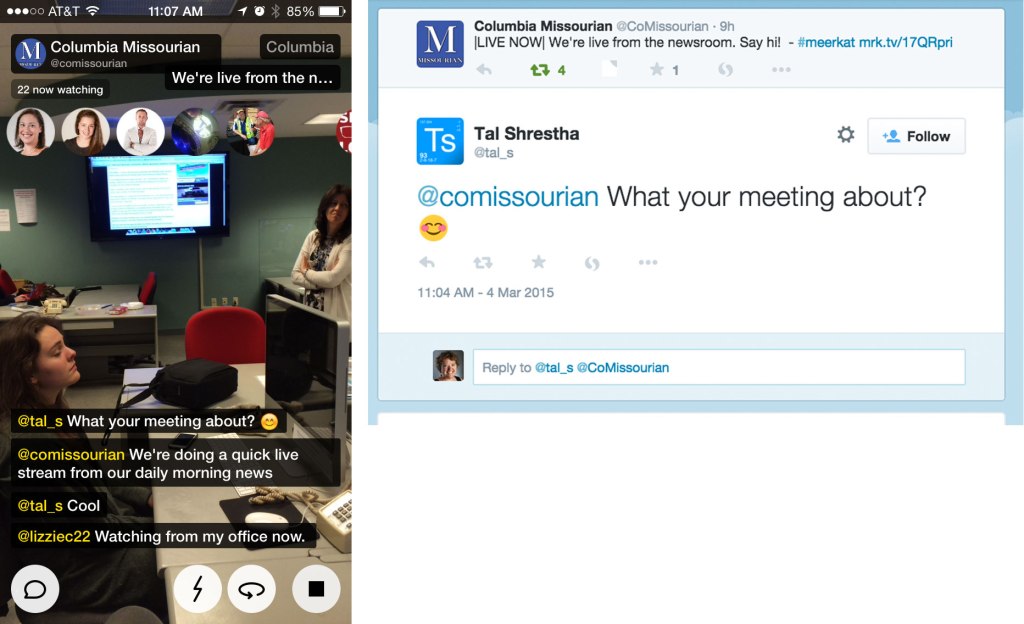 It does show up as a reply to our tweet announcing the stream, so if the tweet is expanded, the context will appear. But it would be nice if a short link or a hashtag appeared as well. (Maybe have the option for the hosts to designate a hashtag?)

Users watching a stream have buttons inviting them to retweet the stream or like it. Below are screen grabs from a stream my colleague, Elizabeth Stephens, set up for testing before the Missourian went live. On the left is the view I saw as a follower. Once I clicked the retweet and like buttons on the bottom, you can see in the right image that those actions were reflected and that the buttons no longer appeared. 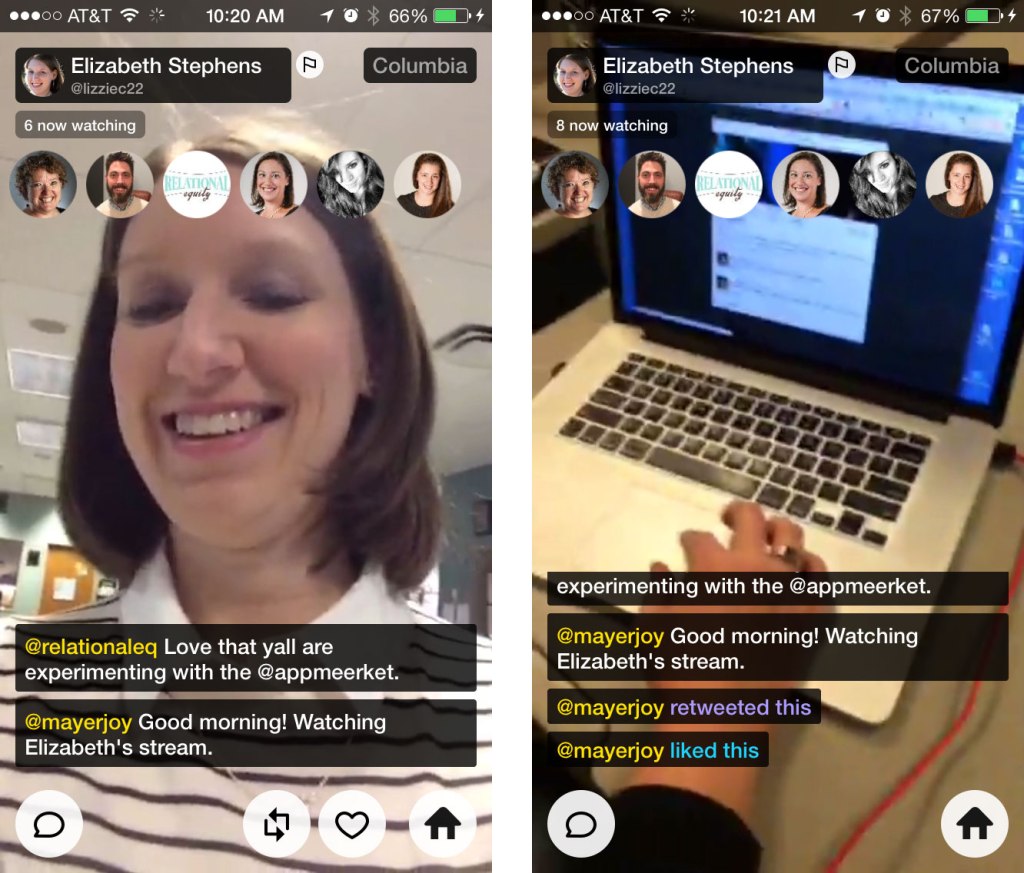 In addition, Elizabeth’s initial automated tweet announcing the stream shows me as having liked it and retweeted it.

The integration is what makes this great. Each interaction has a chance to pique the curiosity of each participant’s network, amplifying the reach pretty quickly. But because the auto-tweets lack context, we weren’t initially sure if they were a bug or a feature.

If you want to watch our 12-minute Missourian experiment this morning, it’s at the bottom of this post. We had about 25 people watching for a big chunk of it, and we learned a lot.

As the person holding the phone, I went back and forth between showing the room and reversing the camera to talk directly to the viewers. A couple of times, I awkwardly stepped back a few steps into my office so I could talk to the viewers without disturbing the meeting.

We talked about ideas for Meerkat use by journalists.

It’d be great for bringing viewers to the sidelines at a football game. Or to a behind-the-scenes tour of a facility or place most people don’t get to go. Or, like we did today, to newsroom conversations.

I’m looking forward to playing with it more.

Director, TrustingNews.org, a project of RJI and API. Strategizing and teaching at the intersection of journalism and community. View all posts by Joy Mayer

One thought on “Quick Meerkat test shows potential for journalists”